On this Independence day, Workafella chooses to recognize some unsung heroes of India. We hope you find their stories just as fascinating and inspiring as we did.

On completing his class X exams, young Jadav returned to his birth place at Aruna Sapori, a river island. He was horrified to find more than a hundred dead snakes on a deserted sandbar – the result of a flood. Something stirred within him and he began to seek help from the community village. He was advised to plant trees. Trees would bring the birds, birds would have eggs, the eggs would serve as food for reptiles. Jadav was given 50 seeds and 25 bamboo plants.

The 16-year-old Jadav went out alone and sowed the seeds and shoots and he never stopped doing so. 36 years later, his efforts have grown into a beautiful forest that hosts a diverse range of flora and fauna, even endangered species like the Bengal Tiger and the Indian Rhino.

What was one only an urging drive is now a tangible lush forest of 1,360 acres. We salute Jadav Payeng. 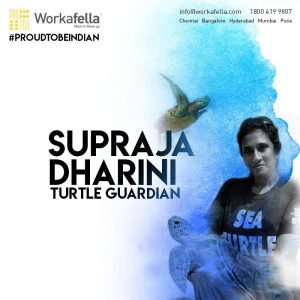 The turtle guardian of India has transformed the attitude of the community in the East Coast of Chennai. From fishermen, to youngsters and families in the surrounding areas, many individuals have been influenced by her efforts to save the Olive Ridley species. She has spent 14 years of her life educating the community about the importance of conserving the ocean and the innumerable life it holds.

Supraja Dharini has also built a sanctuary for elephants in Kerala. An artist who runs the Kalakriti art studio, a voice for the endangered, a teacher who advises on the harms of plastic usage, a talented individual who brings together different people like stakeholders from government ministries to simple fisherman folk, she is an inspiration to the nation.

Fishermen who use to cut off the fins of turtles stuck in nets a few years back, now set them free gently. We Salute Supraja Dharini.

Known as the road doctor of Hyderabad, Gangadhara is a retired railway officer who has exhausted his pension on fixing 1000+ potholes in the city. In 2015, statistics released by the Ministry of Road Transport showed that 10,000+ people were killed due to accidents caused by potholes. While authorities turned a blind eye and civilians simply swerved their vehicles aside, one man who witnessed several tragedies caused by potholes began to take action using a crowbar, a broomstick and a spade.

He began on his mission on January 2010 and eight years later, he now runs a voluntary service called ‘Shramadhan.’ Other individuals inspired by him come together over the weekend to fix potholes.

Gangadhara Tilak Katnam has obtained a No Objection Certificate from the Home Ministry to carry crowbars and a spade in his car. Greater Hyderabad Municipal Corporation Commissioner has provided Tilak with vehicles and materials to continue his mission as the road doctor of Hyderabad. We salute Gangadhara Tilak Katnam. 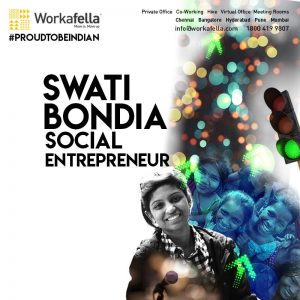 Swati Bondia began transforming the lives of people living under the poverty line, at the age of 18. She founded ‘Om Shanti Traders,’ an organization that finds people on the roadside with zero income and gives them a platform to learn and market a skill. People who went to bed hungry and hopeless every night, now earn up to Rs. 10, 000 a month. They have learned the art of self-sustenance through this organization. The furniture and artwork created by these trained artisans are retailed to clients like Leela Palace, Taj Vivanta and Acharya Institute.

The organization has employed over 200 people. Their children’s education, the family’s health and their ration are all looked after. The first agreement that the families sign is an assurance their girl children will be sent to government schools. Swati’s efforts have been recognized globally and she has won two awards in a year’s time.

At Workafella, we support the Indian community that works on their own terms, the thinkers and doers who go beyond the ordinary to make a difference. We have welcomed these unsung heroes of our nation, to visit the Workafella community and enlighten us further on the steps we can take as individuals, to make our country a better place for every Indian.

Their efforts have taught us that sometimes the happiest people are the givers, not the takers. We hope that their stories will inspire many generations to come.

Login required for member only features.